Individuals who depend on recalled ventilators and other breathing devices manufactured by Philips Respironics have joined in a letter,  along with over two dozen disability organizations, demanding that Philips repair or replace the devices. The recall was announced in June, stating that the devices were found to release potentially harmful particles and gasses, but offering little information and no timeline for corrective action.

I’m among the affected individuals and have been part of a small group of users organizing a response with the support of the New York Law School and its Civil Rights and Disability Justice Clinic. “Respiratory equipment is not like a car that’s faulty. You can stop driving the car, but you can’t just postpone breathing. So we were given a really ridiculous thing that they called a choice, which was use it or don’t,” I told The Verge.

Update: Philips announced a repair and replacement program for one of their recalled models, the DreamStation, on September 1, 2021. 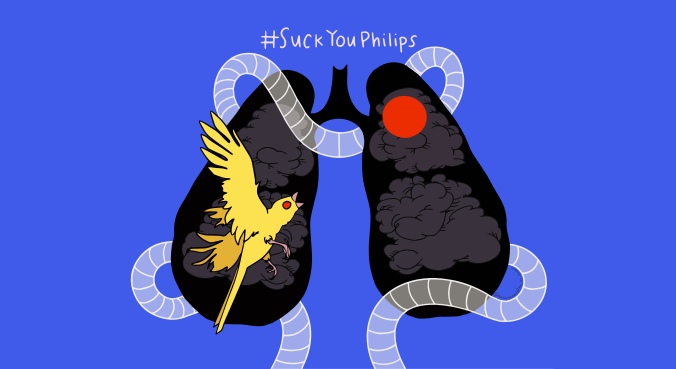 This is a graphic illustration by Haley Brown with a bright cobalt blue background. There are black lungs filled with dark gray puffy clouds. In the left lung is a yellow canary bird with a red eye in a mid-flight attack pose. In the right lung there is a red circle. Around the lungs there is clear white tubing that is entwined. Above this graphic the white text reads: #SuckYouPhilips

The full text of the group’s press release follows.

On June 14, 2021, Philips Respironics issued a recall of thirteen models of ventilators, CPAP, and BiPAP machines. The recall advises that users immediately discontinue use of the affected machines due to the degradation of a foam contained inside the devices that can be inhaled or release certain chemicals that are potentially carcinogenic or have other adverse side effects. However, users who require the devices for life-sustaining care were advised to not cease use of them, and instead told to speak to their physicians, who have not been provided with adequate guidance from Philips Respironics.

Device users had to take it upon themselves to not only get word of the recall out starting in mid-June, but they have also had to organize to push Philips to take basic action.

“Disabled people are once again expected to come up with a contingency plan for ourselves. I am outraged that so little has been done by Philips to recognize, take ownership of, and communicate the urgency that this moment requires for folks like myself who need access to this equipment. This goes far beyond an issue of just replacing faulty medical supplies. Because when we contextualize it during this time of an airborne pandemic, a time of poor air quality in some areas of the country due to climate change, and a time when safe access to services for disabled people is already challenging we see the ways where the system has failed us, again. To leave disabled people without any adequate back-up or an effective course of action was a decision that Philips knew about, and although it is appalling it isn’t shocking to me. This is how ableism works,” Sandy Ho, disabled CPAP user, disability policy researcher and community-organizer.

The letter today demands that Philips immediately develop and implement a device repair and/or replacement process and timeline that prioritizes users who depend on their equipment for survival or that Philips provide so-affected users with comparable devices from other manufacturers free-of-cost. A copy of the letter is attached.

“As a long-term user of both the DreamStation and Trilogy 100, I am terrified for myself and millions impacted by the recall globally. I am an unwitting character in a real-life horror film,” said Alice Wong, Disability Visibility Project. Wong’s outreach to users via social media just one day after the recall was issued resulted in a groundswell of people learning that they were at risk.

Philips acknowledged that extreme heat and humidity exacerbate the degradation of the foam particles in the device. However, in the middle of the summer months and more than two months after the issuance of the recall, many users of Philips equipment have been left with their recalled devices in conditions of intense heat, humidity, and even wildfires that further jeopardize their equipment and health.

“People with disabilities have essentially been left to inhale potentially toxic air through kt heir devices for an indeterminate period of time or to pay for temporary fixes that they are uncertain can protect them. This is not okay,” said Professor Britney Wilson, civil rights attorney and Director of the Civil Rights and Disability Justice Clinic at New York Law School. “We’re calling on Philips to develop, communicate, and execute a repair and replacement plan that prioritizes users who depend on their devices to live and to be transparent about what led to the recall, how Philips is monitoring complaints concerning potential health impacts, and what information about potential risks associated with the long-term continued use of their devices and how to mitigate them has been communicated to healthcare providers and professionals.”

“When I see that many people only found out about the recall by word of mouth or social media, I feel lucky that my local respiratory provider called me. I love my life and have always been pro-active in protecting my health, but they still have no idea when my ventilator will be replaced. The more I learn, the more I’m scared about being harmed by every breath I’m taking,” said Diane Coleman, President & CEO, Not Dead Yet.