Big crip-thanks to him, KALW, and Science Friday for the RESOURCES they put into, ‘Not Worth The Resources’: How The Pandemic Revealed Existing Biases Against The Disability Community.

“We didn’t know if what we were doing was going into a situation where we would never see each other again,” she says, recounting that entering Kaiser’s emergency room in Oakland was “like being wheeled into the lion’s den of the lion’s den.”

Who Is This So-Called “Ingrid Tischer“? 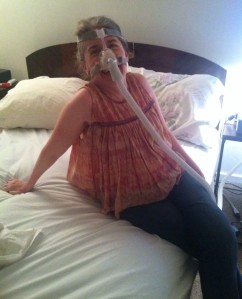 “Coming up on the red carpet is Ingrid Tischer in a Bi-Pap S/T by Respironics. Look at the Velcro detailing. Apnea-wear is SO on trend for evening this year.” (Photo courtesy of Ken Stein.)

Unclaimed author Ingrid Tischer was born on Blasphemy Day in a pirate’s dinghy off the coast of Sardonica during the Regency period and is now an aspiring recluse whose joie de crip and bon mots enchant the tens of people who read her crip lit, media commentary, and extremely sophisticated parody work.

A descendant of Ingratika, an obscure philanthro-peon from Sardonica, Ingrid Tischer also claims to be a woman who has a form of muscular dystrophy (MD), a congenital, degenerative neuromuscular disease that caused the late Jerry Lewis to tell 5 year-olds they could die at any moment, as part of his fundraising strategy.

Ingrid Tischer’s plight has been exacerbated by survival, leading to a poorly understood aspect of muscular dystrophy: Adult-Onset Maturity (AOM).

AOM is marked by behaviors that are considered high risk for parental pulling-away-fromness. Ingrid Tischer’s particularly virulent strain forces her to live with a “spouse,” a “salary,” and has brought her to the brink of “creative work.”

It’s been suggested that Ingrid Tischer’s AOM was caused by legal protections that required public schools to educate students with disabilities, established the right to assisted-living in the community rather than institutionalization, and stocked the bottomless chum-bucket of litigation that is the Americans with Disabilities Act (ADA).

But as we’ve seen with the theory that Jenny McCarthy causes autism, correlation is not cause.

Just because Ingrid Tischer had those legal protections is no reason to believe her contribution to society represents anything other than a new, terrifying mutation of a tragic defect.

Besides disability, what does this Ingrid Tischer have going for her?

Ingrid Tischer is so much more than a person who’s not dead yet. She has exquisite taste in cross-disability civil rights policy, literature, and fatty cuts of meat.  If it’s writing about yourself in the third person, Mexican cheeses, and unsolicited public commentary you’re looking for, just try to do better than Ingrid Tischer.

How can I avoid Ingrid Tischer right now?

The pandemic and the anti-vaxxer jackholes refusing to wear masks – who could kill her right quick – mean there’s never been an easier time to avoid Ingrid Tischer! She’ll be chilling in an undisclosed location for the foreseeable future, visited only by DoorDash delivery people.

But, by all means, keep avoiding Berkeley, a city of grainy black and white footage shot in the 60s that airs periodically on public television during pledge week. Yes, Berkeley. The place some consider the “ground zero” of the interdependent living movement, that explosion in the early 70s that split public streets into car lanes, bike lanes, Rascal lanes, wheelchair lanes, service animal lanes, and disabled service animal wheelchair lanes. A place that pioneered curb cuts to facilitate fleeing from out-of-touch environmentalists intent on outlawing your plastic bendy straws. 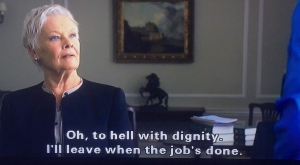 Can you see Ingrid Tischer?

IngridTischer® is a Class-I napazene known for it’s ability to bind with caffeine. IngridTischer® may cause wall-staring, cat envy, and thuggish metabolism. Do not take IngridTischer® if you have been exposed to genre fiction or are between jobs.

If you insist on knowing more about Ingrid Tischer, read this.

One thought on “About This So-Called “Ingrid Tischer” & ICYMI”