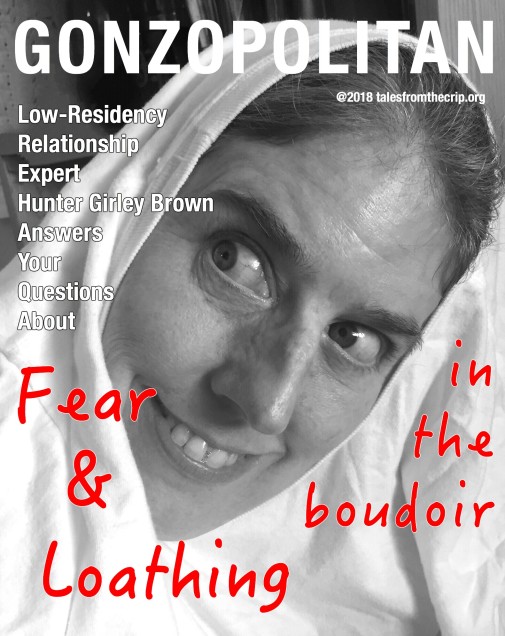 My boyfriend’s mad because even though I bring home the bacon and fry it up in a pan, I’m not helping him remember he’s a man. Any tips for Valentine’s Day?

So yeah. It was the mid-80s and I was shacked up pretty tight somewhere around Barstow on the edge of the desert with Peter DeLuise and Charlie Sheen when the drugs began to take hold. Pete was pretty good about reminding Charlie that he was a man, which was good because between the shimmer lip-glosses I was testing for Gonzo and the heavy psychedelics we were doing, I could barely feel my lips.

That trip was when I realized men are like peacocks. They’re not great in groups and they shouldn’t be alone. Either way, they start screaming and bashing their heads into walls.

Every peacock flock has a screamer that runs into walls. My flock’s got one. Always has. It’s named Charlie. All the screaming head-bashers get named Charlie.

A man who can’t remember he’s a man unless you’re reminding him, leaving him little Post-it notes like, YOU’RE A MAN and DEFINITELY A MAN and whatnot, can probably benefit from some super-charged role-playing. He could play a man and you could play that unattainable love-object: his dad.

What I see is a jealous old machinist who can’t stand the fact that his son has become more successful than he has!

What you see is a guy who never measured a man’s success by the size of his WALLET!

I tell you what, though. I do not hold grudges, even though the above scene put me in the hospital with a heart attack. Our parting’s not as clear in my memory as it could be but it’s not like Charlie didn’t do okay after I hopped that logging truck and left his ass by the gas-pump.  When he landed the role of his life in Two and a Half Man, I wrote him a note of congratulations that said, You were born to play a Half Man. And I meant it.

Bottom line: Men are like an open bottle of Scotch; you can’t be everything in the world to them so you may as well finish them off. Fuck. What do I know. Go with the bacon. Or try greeting your boyfriend at the door wrapped in nothing but Saran wrap and your biggest smile. You’re welcome.

Hunter Girley Brown is the editor of Gonzopolitan and the celebrated author of There’s Not Enough Room in S-P-A-C-E for U and I and Back Off, Baby: Love in the Time of Low-Residency.

2 thoughts on “Gonzopolitan’s Fear and Loathing in the Boudoir: Valentine’s Day”