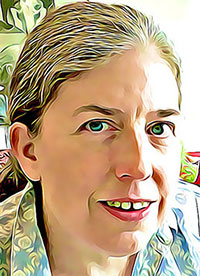 Why exactly did I file a lawsuit? What incredibly minor mistake spelled easy cash for me and my rapacious attorney?

Answer: In 2013, over the Memorial Day weekend, my husband and I stayed overnight at a Courtyard By Marriott, in California’s Marin County. Our ADA-accessible room’s toilet was so low I couldn’t use it. It turned out that its required minimum height fell short by about 3 incredibly minor inches. Or, as I came to think of it in my personal pantheon of access failures, “a new low.” That I most definitely did not expect.

There was more. So much more. But no toilet? Let’s just go with that one thing.

We didn’t immediately say, “We’ll sue them!” Because that’s not the way we, like the vast majority of people, actually behave. Instead, we asked each other incredulously, “That was really wrong, right?” We talked to friends. We needed to hear other people say, “Yeah, that was wrong!” And people did.

No matter how the media characterizes it as an easy attack, litigation is a big deal. Even thinking about filing a lawsuit meant that I had to accept that I didn’t imagine it, that I wasn’t overreacting, and that I was prepared to not put a really lousy experience behind me for quite some time.

The courts are intentionally intimidating but they are also supposed to be a leveling place. I cannot think of any other venue or process for me going up against a multinational corporation. The absurdity of H.R. 620, with its baffling bipartisan support, is that it would put an even greater burden on me, a person who has no legal training, and require me to:

There’s your horror. Me against a giant corporation and HR 620 is convincing y’all that the system’s rigged against the corporation.

That was being an ADA plaintiff. That was my face answering those questions.

When I worked at Equal Rights Advocates (ERA) more than a decade ago, I learned that people who called the Advice & Counseling Line about sexual harassment, for example, could yet be very tentative about whether it was “really” harassment. I think I had a similar hesitancy, at first, even though my head said, “Uh, yeah, you’ve experienced ‘discrimination.’” (Even now, my instinct is to minimize it and write, “Not that what happened to me was anything like being harassed at work!”)

There was another poignant lesson from my doing communications work at ERA for 4 years of the Dukes v. Wal–Mart gender discrimination class action: Plaintiffs would do well to remember they are sticking up for others, as much as for themselves. The named plaintiffs in Dukes endured huge criticism and incredibly disrespectful speculation as to why they were suing for equal pay and advancement opportunities. (That question answers itself.) Being a plaintiff involves exposure. In my case, I was exposed as the lady who’s all fancy and expects to use a toilet while she’s staying in a hotel. Despite having a disability. La-de-da!

How would you feel about a gender discrimination version of H.R. 620? Imagine I’m an hourly associate at Wal-Mart and my manager makes me work off the clock because the male associates “have to get home to their families” and there’s restocking to do. Does Wal–Mart deserve extra time to correct that gender discrimination problem? Is it really fair that a low-wage worker should have to cite the exact provisions for how their rights were violated to the world’s dominant retailer?

If that strikes you as just a tad unfair, remember, too, that H.R. 620’s effects will be borne by low-income people of color because these communities have the highest rates of disability. Although my particular lawsuit – born of the privilege of having access expectations, in the first place – doesn’t fix access problems in corner stores, restaurants, etc., it still contributes to a body of law advancing disability rights. H.R. 620 derails that progress.

So – I’m the “good” kind of plaintiff and I must really resent those legal sharks and their disabled dupes, right? That’s what I’ve had people – including people with disabilities – tell me. No. I don’t. Here’s why:

This post appeared originally on Disability Rights Education and Defense Fund’s (DREDF) blog as “No Roll-Backs On My Civil Rights: A Past Plaintiff on Opposing H.R. 620, the ADA Notification Act.”

6 thoughts on “This #Crip Stays in the Picture: A Past Plaintiff on Opposing H.R. 620, the #ADA Notification Act”

© Ingrid Tischer and Tales From the Crip, 2022. Unauthorized use and/or duplication of this material without express and written permission from this blog’s author and/or owner is strictly prohibited. Excerpts and links may be used, provided that full and clear credit is given to Ingrid Tischer and Tales From the Crip with appropriate and specific direction to the original content, and with notification via email of the person and/or institution’s intended use.